A uterine fibroid is the most common benign (not cancerous) tumor of a woman's uterus (womb). Fibroids are tumors of the smooth muscle that is normally found in the wall of the uterus. They can develop within the uterine wall itself or attach to it. They may grow as a single tumor or in clusters. Uterine fibroids can cause excessive menstrual bleeding, pelvic pain, and frequent urination; so even though they are termed "benign (not cancerous) tumors," fibroids potentially can cause many health problems.

• These growths occur in up to 50% of all women and are one leading cause of hysterectomy (removal of the uterus) in the United States. An estimated 600,000 hysterectomies are performed in the US annually, and at least one-third of these procedures are for fibroids. Medications and newer, less invasive surgical treatments are now available to help control the growth of fibroids.

• Fibroids start in the muscle tissues of the uterus. They can grow into the uterine cavity (submucosal), into the thickness of the uterine wall (intramuscular), or on the surface of the uterus (subsersoal) into the abdominal cavity. Some may occur as pedunculated masses (fibroids growing on a stalk off of the uterus).

• Although these tumors are called fibroids, this term is misleading because they consist of muscle tissue, not fibrous tissue. The medical term for a fibroid is leiomyoma, a type of myoma or mesenchymal tumor. 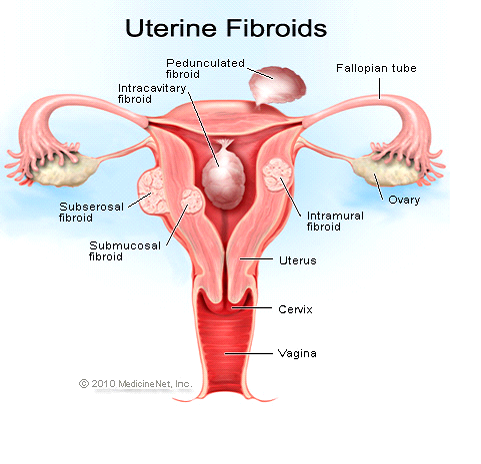 The exact reasons why some women develop fibroids are unknown. Fibroids tend to run in families, and affected women often have a family history of fibroids. Women of African descent are two to three times more likely to develop fibroids than women of other races.

Fibroids grow in response to stimulation by the hormone estrogen, produced naturally in the body. These growths can show up as early as age 20 and shrink after menopause when the body stops producing large amounts of estrogen.

Fibroids can be tiny and cause no problems, but they also can grow to weigh several kilograms. Fibroids grow slowly.

The following factors have been associated with the presence of fibroids:

• Never having given birth to a child (called nulliparity)

• Onset of the menstrual period prior to age 10

Most fibroids, even large ones, produce no symptoms. These masses are often found during a regular pelvic examination.

When women do experience symptoms, the most common are the following:

• irregular vaginal bleeding or an increase in menstrual bleeding, known as menorrhagia, sometimes with blood clots ;

• pressure on the bladder, which may cause frequent urination and a sense of urgency to urinate and, rarely, the inability to urinate;

• pressure on the rectum, resulting in constipation ;

• increase in size around the waist and change in abdominal contour (some women may need to increase their clothing size but not because of a significant weight gain);

• infertility, which is defined as an inability to become pregnant after 1 year of attempting to get pregnant; and/or

• a pelvic mass discovered by a health care practitioner during a physical examination.

A woman's health care practitioner will discuss her medical history and conduct a physical examination that includes a pelvic exam. Often a doctor can feel an irregularly shaped uterus when fibroids are present.

During examination, a pelvic ultrasound will be done and fibroids will be easily diagnosed.

Treatment for fibroids depends on the symptoms, the size and location of the fibroids, age (how close the person is to menopause), the patient's desire to have children, and the patient's general health.

No specific self-care is available for fibroids. But if a woman has abnormal or heavy menstrual bleeding, she should keep a diary of her menstrual cycle in order to provide the information to her health care practitioner.

In many cases treatment is not necessary, particularly if the woman has no symptoms, has small tumors, or has gone through menopause. Abnormal vaginal bleeding caused by fibroids may require inspection of the uterine cavity in the procedure known as hysteroscopy. If no malignancy (cancer) is found, this bleeding often can be controlled by hormonal medications. The following treatment options should be discussed with a health care practitioner.

The woman's doctor may follow the size and growth of the fibroids over time to make sure no indicators of cancer are present. If the person does not have symptoms such as vaginal bleeding or pelvic pain, and if the fibroid is not growing rapidly, no treatment may be needed. Some patient's may, however, require more frequent pelvic exams, such as every 6 months, to check on changes with the fibroid(s).

• Nonsteroidal anti-inflammatory agents have been shown to relieve pelvic pain associated with fibroids.

• Oral contraceptive pills are also commonly used in women with fibroids. Although the hormones (including estrogen) in such birth control pills may increase the size of the fibroid, they often decrease perceived menstrual blood flow and help with pelvic pain.

• Gonadotropin releasing hormone (GnRH) agonists are medications that act on the pituitary gland to decrease estrogen produced by the body. A decrease in estrogen causes fibroids to decrease in size. This type of medication is often used prior to surgery to shrink the fibroid, to decrease the amount of blood loss during surgery, or to improve preoperative blood count. The size of the fibroid can be reduced by 50% in three months with this type of therapy. But fibroids can regrow once treatment is stopped. Long-term therapy with these medications is limited by the side effects of low estrogen (much like menopause caused by drugs), which include decreased bone density,osteoporosis, hot flushes and vaginal dryness.

• Myomectomy is the surgical removal of the fibroids only. This can be accomplished through hysteroscopy, laparoscopy or an open procedure (an incision in the abdomen). The surgical approach depends on the size, number and location of the fibroids. The uterus is left intact in this type of procedure, and the patient may be able to become pregnant.

• Hysterectomy is the surgical removal of the uterus (and fibroids). It is the most commonly performed surgical procedure in the treatment of fibroids and is considered a cure. Depending on the size of the fibroid, hysterectomy can be performed with incisions through the vagina or abdomen. Today, in most cases procedure may be performed using laparoscopy.

Use of GnRH agonists can reduce the size of the fibroid to allow less invasive surgical techniques.

Routine health visits with a health care practitioner may allow for early detection of fibroids.

Treatment success and future outcome depend on the severity of the fibroid or fibroids prior to treatment and the chosen treatment. Fibroids may affect fertility, but this depends on the size and location of the fibroids. Many women with fibroids are older than 35 years. This and other factors such as decreased egg quality and decreased ovulation contribute to their inability to become pregnant.

Fibroids rarely turn into cancer. This is more likely to occur in women after menopause. The most common warning sign of cancer is a rapidly growing tumor that requires surgery.