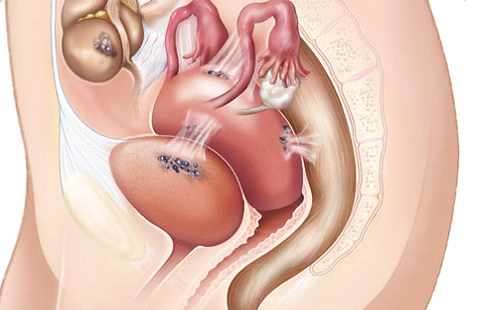 Endometriosis is a common disorder of the female reproductive organs and is the leading cause of chronic pelvic pain in women.

• Endometriosis is more common in Caucasian women than in African or Asian women. Studies have also reported that endometriosis tends to occur most commonly in taller, thin women with a low body mass index (BMI).

• Women with first degree relatives who have endometriosis are also more likely to develop the condition, suggesting that the genes a woman inherits from her parents can sometimes predispose her to develop endometriosis.

• The endometrium is the inner layer of uterine tissue that is shed during menstruation.

• The thickness of the endometrial layer is related to the egg-producing (ovulatory) cycle and the hormonal levels that regulate this cycle.

• The endometrium is at its thinnest immediately following menstruation and thickens during the first two weeks of the menstrual cycle.

• Once the release of the egg (ovulation) has occurred, the endometrial tissue becomes rich in glands.

• The whole process prepares the uterus for the attachment of a fertilized egg. If implantation does not occur, the endometrial layer is shed, and bleeding, known as menstruation (a period), begins.

• Endometriosis occurs when growth of this endometrial tissue develops outside the uterus. This growth usually occurs within the pelvic region on the ovaries and other pelvic structures, such as the bladder and colon, but it may also occur within the abdominal cavity and as far away as the lungs, arms, legs, and even the brain.

• Endometriosis is also noted to be less severe when hormone levels are more constant. These conditions include pregnancy and other times when there is lack of a menstrual cycle.

• Menstrual products, including endometrial cells, may escape into the body through the Fallopian tubes and are deposited onto internal structures such as the ovaries, the bladder, and portions of the large intestine.

• These cells, once deposited, are able to respond to progesterone and estrogen in much the same way as normal endometrial tissue within the uterus.

• Another theory, also known as coelomic metaplasia, suggests that a layer of cells surrounding the ovaries and other cells within the pelvic region are able to change into endometrial cells that are much the same as normal endometrial tissue. It is not certain what causes this development, but evidence suggests irritation by retrograde menstrual flow or infections may be the culprit.

• Transfer of endometrial tissues by a surgical procedure might be the cause for endometriosis implants seen in surgical scars (for example, episiotomy or Cesarean section scars).

• The rare cases of endometriosis that develop in the brain or other distant organs are likely due to the spread of endometrial cells via the bloodstream or lymphatic system.

• Some studies have shown alternations in the immune response in women with endometriosis, suggesting that abnormalities in the immune system may play a role in the development of the condition.

Endometriosis varies in symptoms and severity depending on the woman and the timing of the menstrual cycle.

• The most common symptom noted by women with endometriosis is pelvic pain that is worse just before menstruation, which then improves at the end of the menstrual period.

• Other common symptoms are increased pain during menstruation (dysmenorrhea), pain with sexual intercourse (dyspareunia), and infertility .

• The age at which endometriosis develops varies considerably. Some adolescent women note painful menstruation when their periods first begin. This condition is later diagnosed as endometriosis, while other women are in their 20s, 30s, or older before endometriosis is diagnosed.

• Women often describe the pain as a constant, aching pain that is deep and often spreads to both sides of the pelvic region, the lower back, abdomen, and buttocks.

• There is no correlation between the severity of the symptoms and the amount of disease (the degree or extent to which endometriosis implants are present). Some women have no pain, even though their disease affects large areas. Other women with endometriosis have severe pain even though they have only a few small growths.

• Many women with endometriosis have no findings on physical examination that could suggest the diagnosis, and symptoms provide the only clues to the diagnosis.

• Although physical examination findings cannot positively diagnose endometriosis, the doctor may find pelvic nodules that are tender during a physical exam or masses in the ovaries that are common signs of the condition.

• An area of endometriosis on the ovary that has become enlarged is referred to as endometrioma. When the center of this fills with blood, it is known as a chocolate cyst , referring to the appearance of the tissue. Chocolate cysts can become very painful, mimicking the symptoms of other ovarian problems.

Recent research shows a link between other health problems in women with endometriosis and their families. Some of these include:

• Autoimmune diseases, in which the body's system that fights illness attacks itself instead. These can include hypothyroidism, multiple sclerosis, and lupus.

• Being more likely to get infections and mononucleosis

• Mitral valve prolapse, a condition in which one of the heart's valves does not close as tightly as normal

Endometriosis cannot be diagnosed with certainty by symptoms and physical examination alone and direct visualization of the endometriosis implants, typically via laparoscopic surgery provides the definitive diagnosis.

A number of different classification systems have been developed for staging endometriosis. Although the stage (extent) of endometriosis does not relate to the severity of clinical symptoms, it may be useful in predicting a woman's chances of fertility. Typically, endometriosis is classified as minimal, mild, moderate, or severe based upon visual observations at laparoscopy. Minimal disease is characterized by isolated implants and no significant adhesions. Mild endometriosis consists of superficial implants less than 5 cm in aggregate without significant adhesions. In moderate disease, multiple implants and scarring (adhesion) around the tubes and ovaries may be evident. Severe disease is characterized by multiple implants, including large ovarian endometriomas along with thick adhesions.

As in the case of any chronic condition, lifestyle changes like regular exercise and consumption of a healthy diet are recommended.

To halt or slow the progression of endometriosis, the doctor will start by prescribing medication. Surgery is recommended if medications fail or endometriosis is suspected to be the cause for infertility. The primary therapy initially recommended for the pain of endometriosis is a nonsteroidal antiinflammatory drug (NSAID). If NSAIDs are not sufficient for pain control, doctor may prescribe stronger medications, even including opioid (narcotic) drugs. Care should be taken when using these drugs due to the possibility for abuse and addiction. Depending on the severity of the disease, the next step in the treatment of endometriosis is to slow or halt the proliferation of the endometrial tissue outside of the uterus. Different treatment strategies may be employed to change the hormone levels that promote endometriosis. Gonadotropin-releasing hormone analogs (GnRH analogs) Gonadotropin-releasing hormone analogs (GnRH analogs) may be prescribed to relieve pain and reduce the size of endometriosis implants. GnRH analogs are administered by nasal spray or by intramuscular injections at one to three month intervals. These drugs suppress estrogen production by the ovaries, resulting in a cessation of menstrual periods, and symptoms mimicking those of the menopausal transition including hot flushes, vaginal dryness, irregular vaginal bleeding, mood changes, fatigue and osteoporosis. Fortunately, many of the annoying side effects due to estrogen deficiency can be avoided by administering small amounts of estrogen and progesterone in pill form. Oral contraceptive pills Oral contraceptive pills (OCPs, estrogen and progesterone in combination, birth control pills) are also sometimes used to treat endometriosis in women who also desire contraception. Weight gain, breast tenderness, nausea , and irregular bleeding may be mild side effects.

Progestins in the form of tablets, inrauterine device (Mirena) and the newest dienogest (Visanne) treatment are more potent than birth control pills and are sometimes used in women who do not obtain pain relief from OCPs. Side effects include breast tenderness, bloating, weight gain, irregular uterine bleeding, and depression.

Danazol (Danocrine) is a synthetic drug that stimulates high levels of androgens (male type hormones) and low estrogen levels by interfering with ovulation and ovarian production of estrogen. This drug is effective for pain relief and shrinkage of endometriosis implants, but has a high incidence of side effects and is rarely used.

Aromatase Inhibitors Another strategy is the administration of drugs known as aromatase inhibitors (Femara) . These drugs disrupt estrogen formation within the endometriosis implants themselves. They also inhibit estrogen production in other areas of the body. Aromatase inhibitors cause significant bone loss with prolonged use. A further drawback is that these drugs stimulate development of multiple follicles at ovulation, so they must be used with caution in premenopausal women and may be combined with another medication such as a GnRH agonist or oral contraceptive pill to suppress the development of follicles.

If treatment with medications does not work or is not appropriate for a woman, surgery can be considered if she has severe pain or severe damage to the pelvic structures.

• Laparoscopic surgery (a minimally invasive, camera-guided surgical procedure) may be used in an attempt to remove all endometrial tissue outside of the uterus. This removal is often performed during the surgery when endometriosis is diagnosed.

• Surgery to remove the uterus and ovaries, called a hysterectomy, is considered for women who fail medical therapy and no longer wish to have additional children.

• Most women find relief from symptoms once menopause is complete and when the levels of hormones responsible for promoting this disease diminish.

Because the levels of hormones that affect endometriosis are related to the menstrual cycle, endometriosis can be expected to lessen in intensity or, at the very least, stabilize during periods when hormonal levels are not in constant fluctuation. These conditions include pregnancy and other times when there is a lack of menstruation. Women also tend to notice a reduction in their symptoms once they reach menopause.

Endometriosis is a chronic condition. If a woman develops this disease, she will benefit from developing a long-lasting relationship with her gynecologist, who can direct her treatment and follow her response to therapy.

Research suggests that frequent and early pregnancy, use of oral contraceptives, and daily exercise may all help decrease the overall incidence and severity of endometriosis. Endometriosis and Infertility: Endometriosis is known to be a common cause of infertility in women, but it does not always cause infertility. Research has shown that many women with untreated endometriosis have a decreased ability to conceive. Issues concerning infertility are best discussed with a doctor, gynecologist, or fertility specialist; who can guide a woman toward appropriate treatment options.

If a woman is successful in becoming pregnant with endometriosis, she can expect the disease to have little, if any, impact on her pregnancy. Because pregnant women do not have the changes in hormone levels that happen with ovulation and menstruation, they typically do not experience many of the symptoms associated with endometriosis.